skip to main | skip to sidebar

butter
this is a fatty, oily substance, made with cream taken from milk and thickend by beating.
all kinds of milk can produce butter. the richest butter, with the largest fat content, comes from goat's milk. the scythians and the paeonians introduced it into greece, hippocrates only talk of the scythians butter. horace and virgil speak of cheese, but not of butter. werther made butter poetical. it was while watching charlotte buttering bread for the children that he was overcome by that fatal passion which ended with a pistol shot.
goethe was right; children like nothing as much as buttered bread, except it is bread and jam.
in a few countries where i have travelled, i have always had freshly made butter, made on the day itself. here, for the benefit of travellers, is my recipe; it is very simple, and at the same time full-proof.
wherever i could find cow's milk or camel milk, mare's milk, goat's milk, and particularly goat's milk, i got some. i filled a bottle three quarters full, i stopped it up and i hung around the neck of my horse. i left the rest up to the horse. in the evening, when i arrived, i broke the neck of the bottle and found, within, a piece of butter the size of a fist which had virtually made itself. in africa, in the caucasus, in sicily, in spain, this method has always worhed for me.
alexandre dumas
1873
from dumas on food, the folio society 1978
Gepost door otark productions op 10:42 Geen opmerkingen: 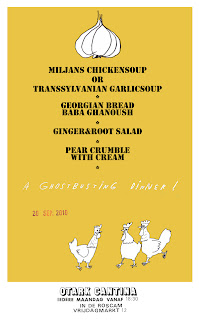 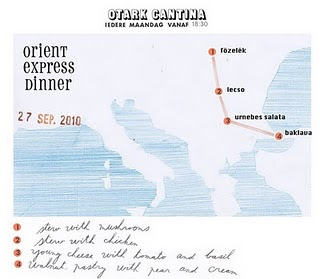 to celebrate and welcome the wind, the rain and the grey, we made a meal with home made soft cheese made by miljan, then mashed potato, pumpkin and celerjak, served with a stew of carrot, onion, schalottes, pastinak, bay leaves and girolle mushrooms....mmmm...

for dessert we had a baklava with wallnuts, sultanas, filla, served with yogurt and cream. 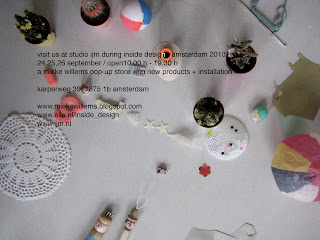 we are very happy to pressent to you the vegetable zodiac. it started with our friends mieke and veronik from the late 'mieke willems' who wanted an after noon of fortune telling. they had very beautiful tarot cards from andrea ayala, and we came up with the vegetable zodiac.
we also made strong turkish coffee for anyone who was there, took a picture of the cups, and they all recieved an email with their personal coffee stories, to be told by miljan.

this weekend we will join mieke and veronik in their weekend-shop in amsterdam, with the vegetable zodiac and fortune cookies spiced with ginger, cinnamon, nutmeg and pepper. 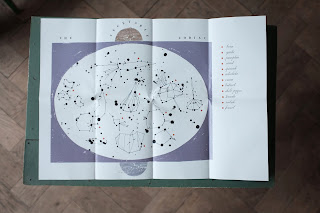 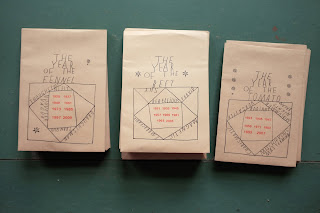 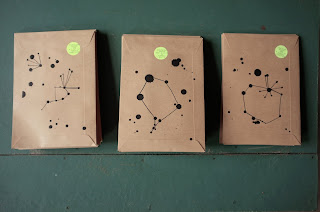 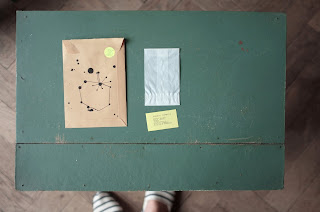 "sakes alive!
it's almost five!
it's time to have my dinner.
the outer part of me is fine,
but what about the inner?
from "whiskers and rhymes"
by arnold nolen
Gepost door otark productions op 14:24 Geen opmerkingen:

we just love smuggling. not talking about drugs or humans, guns or weapons, but the good old
alcohol, sausages, bread and vegetables. in some parts of the world, people are carrying big suitcases full of expensive clothes, and in other parts, suitcases full with whatever that remind you of your home. our friend L. brought from normandy for the cantina buckweat flour, honey-wine, vegetables and the knowledge of making the tastiest salidou - a creamy cream of sugar, butter and fresh cream.
coming soon - a recipe for salidou..
Gepost door otark productions op 14:14 1 opmerking: 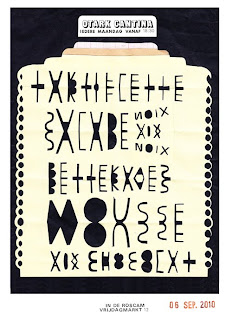 "when he bring me the bread basket i see that the rolls are twisted and baked into adventurous
shapes. they bare all faintly and disarmingly zoological in their outlines. i chose one which is coiled likea snail with two horns sticking out. but i could also take one shaped like a sea cucumber or one which is a fanciful rendering of a scorpion in its death pangs.
the body of the bread is yielding like clay, and tastes of mould. the crust is thin, brittle, and yellow, flaking at the merest touch. bad dough badly baked.
the apset thing one can say about the cremonese rolls isthat they are intriguing.
this in itself is already a condemnation, because the job of the roll is to play second fiddle to other more important dishes. the roll should be to the meat what the secretary is to the executive: soothing, aiding, absorbing, and never domineering.
rolls, therefore, should look self-effacing, and when i come across rolls which rivet my attention by their very appearance i am seized at once with grave misgiving.
the rolls of cremona should not be classed under food but under arts and decoration, and treated
accordingly. the wise traveller will no more attemp to partake of them when he would break off and nibble the scroll of a façade."

otark productions
Otark Productions is a food collective based in Antwerp, Belgium, consisting of Hadas Cna'ani and Charlotte Koopman, with the help of friends and other guests. The texts on this blog are written by Hadas, Charlotte takes care of the graphics- unless otherwise stated-and both are doing everything else.